Welcome to the Dear Evan Hansen Wiki! We are all here to share our knowledge on the wonderful musical Dear Evan Hansen. We've cried, we've laughed, we've loved, we've hated, and all the while through the time we watched this musical, we've enjoyed it and everything contributed to it. Feel free to edit existing articles, or create your own! And remember, #youwillbefound all the time. 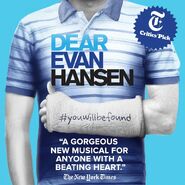 Mike Faist, Will Roland, and Ben Platt performing Sincerely Me.

Dear Evan Hansen is directed by Michael Grief (Rent, Next to Normal), with a score by Benj Pasek and Justin Paul (Dogfight, Edges, Smash) and a book by Steven Levenson (The Unavoidable Disappearance of Tom Durnin, If I Forgot). Ben Platt, Rachel Bay Jones, Michael Park, and Jennifer Laura Thompson, who all originated their roles in D.C, were invited to reading in May 2014. Will Roland, Mike Faist and Laura Dreyfuss were added to the cast for the second reading in July 2014, and there was a third and final reading in September 2014. Finally, there was a full workshop in March 2015. On July 10, 2015, Dear Evan Hansen premiered at Arena Stage in Washington, D.C and ran until August 23, 2015. From May 1, 20,16 to May 29, 2016, the show played an Off-Broadway run at Second Stage Theatre. Dear Evan Hansen opened on Broadway on December 4, 2016.

Dear Evan Hansen is about a teen named Evan Hansen who struggles with severe anxiety and also has a broken arm, which he claims occurred when he fell out of a tree. His therapist, Dr. Sherman, suggested he write letters to himself, which leads to the title, Dear Evan Hansen. Connor Murphy runs into Evan in the Computer lab one day. Connor finds Evan's letter, in which Evan writes about having a crush on his sister, Zoe and Connor sees it and accuses Evan of trying to get Connor to find it and get him mad at him to make fun of Connor for his reputation of anger and violence. Connor signs Evan's cast and runs off. Three days later Evan is worried about what Connor will do with his letter. He is called to the Principal's office where he finds Connor's parents. He learns that Connor committed suicide. The Murphy's think Connor and Evan are friends because of the letter. Evan tries to clarify that they didn't know each other but can't because he sees how much of a comfort it is to Cynthia Murphy to believe they are friends. Evan's anxiety leads him to make up a story that Connor was there when he broke his arm. Then he keeps digging himself into a spiral of lies, creating more emails and creates The Connor Project which makes him more popular. This musical is a story of how social media has to lead to weaker human connection and that we are all looking to be found, to matter to someone.

Included in the Official Soundtrack

Excluded from the Official Soundtrack

Community content is available under CC-BY-SA unless otherwise noted.
Advertisement